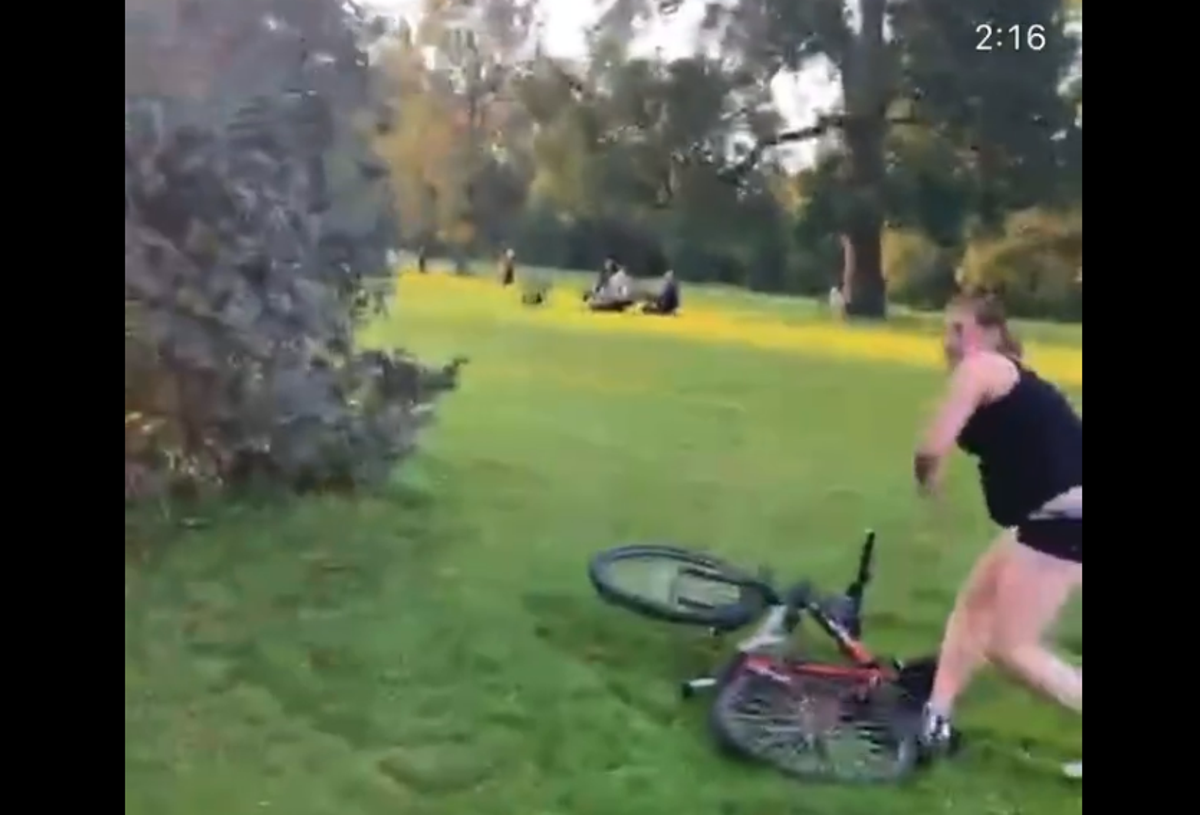 A viral video taken in Ottawa captured the moment that a woman appears to attack an Indigenous woman for apparently not wearing a bra, according to the victim’s account.

“Yesterday evening I was attacked by a white woman who was upset I was wearing no bra. I utilized IG live to record her actions against me,” wrote Anishinaabe Twitter user Laura Gagnon in a caption sharing the since viral video. “I have never experienced a white mob chasing me and it’s the scariest thing that’s ever happened to me in my life. Please be safe out there.”

Ottawa Police confirmed that The Independent that a 37-year-old woman has since been formally charged with assault and mischief after they received a report about an incident occurring on Wednesday at around 6.40pm at a park in Canada’s capital city.

Officers responding to the scene confirmed that a woman had been assaulted. The suspect, who has not been identified, was released from custody after charges had been laid against her under the promise that she would appear in court.

In the nearly two-minute viral video posted last week, viewers can see an enraged woman running full tilt at Ms. Gagnon while shouting indiscriminately at her.

The victim, who is filming the attack, can be heard asking the alleged attacker why she is targeting an Indigenous woman and “body-shaming” her for apparently not wearing a bra on unceded Algonquin territory, referring to land that First Nations people in Canada never ceded or legally signed away their lands to the government.

“I’m trying to document here. She assaulted me and I want her information because I would like to make a police report,” the woman says off-screen, after appearing to have been assaulted by the attacker.

“I’m trying to run away from her,” the victim can be heard shouting back at the crowd, all off screen.

The suspect is then seen on a bicycle approaching the woman again, before the footage on the screen is turned face down on what appears to be the grass.

In the next moment, the woman has reached her car and is in the parking lot trying to leave the park but is unable to as she pans up and shows the same cyclist planted on the hood of her car, blocking her from leaving.

“Guys, I’m being attacked right now,” Ms Gagnon can be heard saying to her camera from behind the wheel of her car, before she shouts back at someone in the crowd who seems to want her phone that it’s “my personal property .”

Ms. Gagnon has lived in the nation’s capital for the past 11 years and toldThe Independent that up until that night, she had felt safe going through her city, no matter where she was or what she was wearing.

“I know that people have been feeling unrest post-Covid but we need to better understand that kindness and acceptance of other people’s bodies, clothing or any other piece of attire should be a given, especially in 2022,” said Ms Gagnon in an emailed statement to The Independent about the attack in the park.

“As an Indigenous woman, I am extremely aware of colonial violence, the hyper-sexualization of our bodies and the stereotypes we face every single day,” she added. “I want people to educate themselves on body autonomy, and the sovereignty that we have over our bodies.”

Ms Gagnon says she “will continue to hold my head high, to inspire and uplift others despite my haunting experience. I know that my spirit and the support from other people’s good thoughts, prayers and love has taught me that negativity can be met with love. We need these lessons to carry on for future generations.”

The Ottawa Police Service said they are continuing to investigate the incident that erupted at the public space on Wednesday night, describing it as a “verbal altercation that escalated into a physical altercation.”

The department has also reportedly forwarded the case onto the Ottawa Police Service Hate and Bias Crime Unit but have yet to file any hate-related charges against the suspect, the department confirmed to the Ottawa Citizen.

Hate-motivated crimes in Canada have been on the rise in recent years, with the onset of the pandemic triggering an unprecedented uptick in racially and ethnically motivated crimes, Statistics Canada reported.

Canadian police reported 2,669 criminal incidents that were motivated by hate in 2020, which was the largest number recorded since the federal agency began collecting comparable data back in 2009.

During the first year of the pandemic, police-reported hate crimes rose by 37 percent compared to the previous year and between 2019 and 2020, the number of police-reported crimes motivated by hatred of a race or ethnicity increased 80 percent, from 884 to 1,594.

By adminSeptember 13, 2022WorldLeave a Comment on Cyclist charged after allegedly attacking Indigenous woman for not wearing a bra