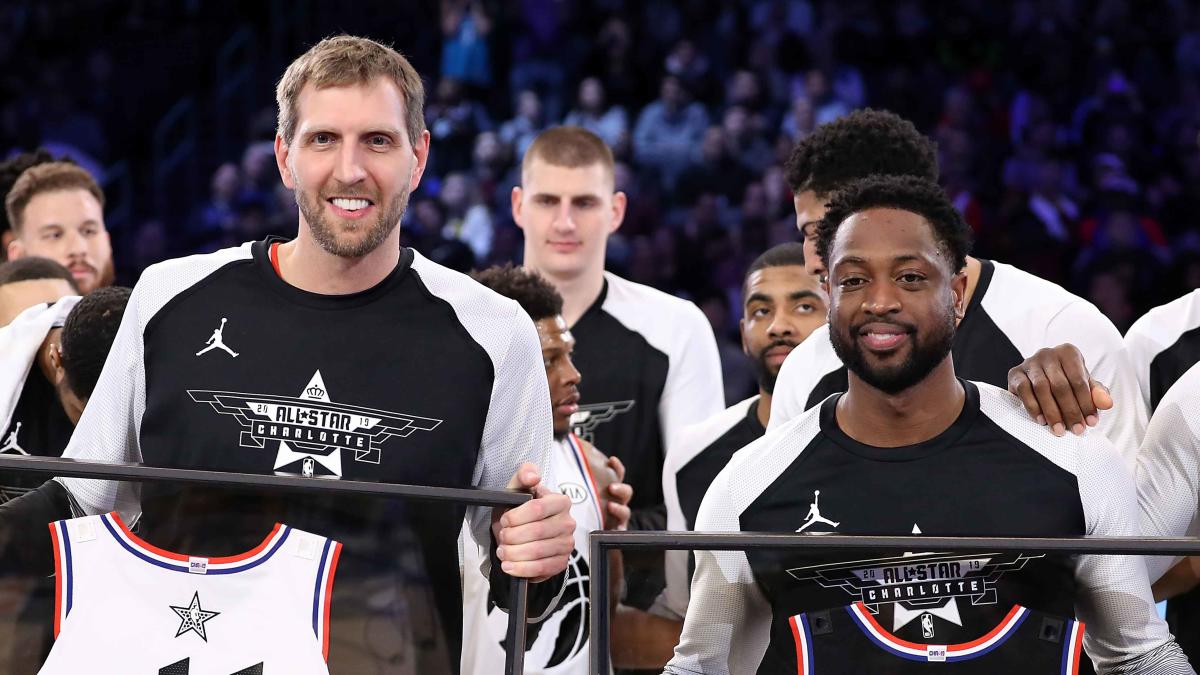 The 2023 Basketball Hall of Fame class will be one to remember.

The 2022 enshrinement ceremony took place over the weekend with Manu Ginobili and Tim Hardaway Sr. among the former NBA players to get their names immortalized in Springfield, Mass. When it comes to 2023, there’s a strong group of players who are set to get voted in on their first attempt.

NBA players need to be retired for four years before they can qualify for the Hall of Fame ballot. The 2019 season featured two legendary farewell tours for players who were among the most decorated in their generation.

Here are 10 of the top NBA players who are eligible to get a call to the Naismith Memorial Basketball Hall of Fame next year:

Four NBA champions are well on their way to the Hall of Fame in 2023.

Dirk Nowitzki and Dwyane Wade are two of the 28 players throughout NBA history with a 100% Hall of Fame probability on Basketball Reference. LeBron James, Kevin Durant and Chris Paul are the only other players among those 28 who are not yet in the Hall of Fame, and, of course, those three are still playing. Further down the list, Tony Parker has a 93.86% chance of getting in and Paul Gasol has a 93.35% chance.

That one metric does not come close to telling the full story for any player, let alone greats with resumes like Nowitzki, Wade, Gasol and Parker.

Nowitzki was a 14-time All-Star, 12-time All-NBA selection and the 2006-07 NBA MVP. He captured an elusive title when he led the Dallas Mavericks past Wade’s Miami Heat in the 2011 NBA Finals. The German power forward ranks sixth on the NBA’s all-time scoring list and will go down as one of the best shooting big men in basketball history.

Wade captured his first NBA championship at a much younger age, propelling the Heat to a 2006 Finals triumph against Nowitzki and the Mavericks at 24 years old. He went on to win back-to-back titles in 2012 and 2013 while playing alongside James and Chris Bosh. For his career his, Wade earned 13 All-Star selections, eight All-NBA selections and three All-Defensive selections to go along with his three rings his.

Gasol arrived from Spain and spent his first six-plus NBA seasons with the Memphis Grizzlies. His career his truly took off during the 2007-08 season when he was traded to the Los Angeles Lakerswho will retire Gasol’s No. 16 during a ceremony on March 7. Gasol’s career accolades include two NBA championships, six All-Star appearances and four All-NBA selections.

The last of the 2023 first-year-eligible locks is Parker, who will soon join longtime San Antonio Spurs teammates Ginobili and Tim Duncan in the Hall of Fame. The French point guard played 17 years in San Antonio, made six All-Star teams, was named to four All-NBA teams and claimed four NBA titles.

Chauncey Billups, Shawn Marion and Amar’e Stoudemire on the next level when it comes to Hall of Fame resumes.

Billups, who won Finals MVP for the Detroit Pistons in 2003-04, is now head coach for the Portland Trail Blazers. Along with the Pistons, he ultimately played for seven franchises. His resume boasts five All-Star teams, three All-NBA teams and two All-Defensive Teams.

Marion and Stoudemire were key members of the “Seven Seconds or Less” Phoenix Suns in the mid 2000s. Though that team ultimately did not reach an NBA Finals, Marion later won a championship with Nowitzki and the Mavericks in 2011. Marion was a four-time All-Star and two-time All-NBA player. Stoudemire’s list of accolades includes more All-Star nods (six) and All-NBA selections (five), but he never lifted the Larry O’Brien Trophy.

Billups and Marion have made steps towards making the Hall of Fame in the past, as were both nominees for the 2022 Hall of Fame class but did not become finalists.

Moving a bit further back into NBA history, Larry Foust, Shawn Kemp and Detlef Schrempf are three of the best retired players who have not made it to the Hall of Fame.

Foust played from 1950 to 1962 and was named an All-Star eight times in his first nine seasons with the Fort Wayne Pistons and Minneapolis Lakers, becoming one of the first dominant big men in league history. He actually has a greater Hall of Fame probability on Basketball Reference (94.2%) than Parker and Gasol.

Kemp may be best known for his ferocious dunks, but his overall resume puts him in the Hall of Fame conversation. He was a six-time All-Star, made three All-NBA teams and was an integral part of the Seattle SuperSonics’ run to the Finals in 1995-96.

Schrempf paved the way for Nowitzki to even make the NBA. The German-American big man starred in his role his with the 1990s Indiana Pacers and SuperSonics, winning two Sixth Man of the Year awards and three All-Star nods. He may not carry the statistical resume of other players up for the 2023 Hall of Fame class, but that does not diminish his lasting impact his.